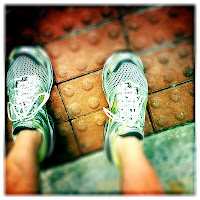 Energy systems used during running varies depending upon several factors including intensity, duration, recent calorie intake, etc. Let's take a look at how each system is called into action.

Clark and Lucett (2009) show distance running to be ten percent ATP/CP, twenty percent glycolysis, and seventy percent oxidative (aerobic) energy systems. All three energy systems contribute at the start of exercise but the contribution depends upon the individual, the effort applied or on the rate at which energy is used (Mackenzie, 1998).

CP - Creatine Phosphate: a chemical compound stored in muscle, which when broken  down aids in the manufacture of ATP. The combination of ADP and CP produces ATP.

LA - Lactic acid: a fatiguing metabolite of the lactic acid system resulting from the incomplete breakdown of glucose. However Noakes in South Africa has discovered that although excessive lactate production is part of the extreme fatigue process, it is the protons produced at the same time that restricts further performance

O2 means aerobic running in which ATP is manufactured from food, mainly sugar and fat. This system produces ATP copiously and is the prime energy source during endurance activities

As the fastest way to get ATP for muscle contraction, the phosphagen system is the predominant energy system used for races lasting up to 10 seconds. The muscles of sprinters like Maurice Greene, who has run 100 meters in 9.79 seconds, are great at   producing ATP via the phosphagen system. Training this system consists of running short, very fast sprints lasting 5 to 15 seconds with 3 to 5 minutes rest between each. The long rest periods allow for creatine phosphate to be replenished in the muscles so it can be reused for the next interval.

The anaerobic glycolysis system is stated by Karp (2006) as:

Glycolysis, literally meaning "to break glycogen," is the second fastest way to get ATP. It is the predominant energy system used for races lasting from 30 seconds to two minutes. Even the mile, however, if run in less than about five minutes, relies heavily on anaerobic glycolysis for energy.

Karp (2006) defines the aerobic system as the following:

Since humans evolved for aerobic activities, it’s not surprising that the aerobic system, which is dependent on oxygen, is the most complex of the three energy systems. As such,   it is also the slowest way to get ATP. "I’m oxygen," it says to the muscle, with more than a hint of superiority. "I can give you a lot of ATP, but you will have to wait for it."

The aerobic system is the predominant energy system used for races lasting longer than three minutes. Since distance running is primarily limited by the delivery and use of oxygen, most of your training should focus on improving your aerobic system’s ability to supply oxygen to your running muscles.

How is each system trained? Exercise intensity & duration play major roles in determining which system is used. According to Karp (2006) the phosphagen system is trained via short sprints five to fifteen seconds long with three to five minutes of recovery between each sprint. The anaerobic glycolysis system is trained by performing sprint intervals for thirty seconds to two minutes. The work rest ratio is one to two. The aerobic system is trained through long duration runs with high weekly mileage.


Karp, J. (2006). Turn on the power. Retrieved from http://runningtimes.com/Article.aspx?ArticleID=7792&CategoryID=&PageNum=1

By runnergirl training at September 10, 2011