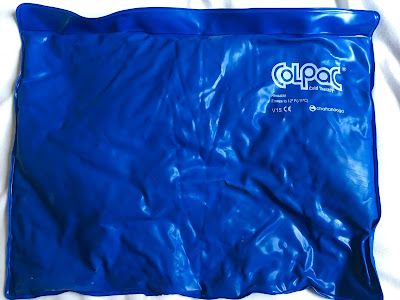 This is a product review for a product which I personally purchased and received no compensation.


Ever need a reusable ice pack after working out & you’re tire of making due with those small bean shaped ice packs from the pharmacy? Enter the Chattanooga ColPac ice pack. I stumbled upon this ice cold gem from my physical therapist. It is a heavy duty get-the-job-done ice pack! The outer material is thick and is designed not to leak like the aforementioned smaller ice packs. It stays COLD and will still be cold after your 5-15 minutes of icing session is up.

It is very moldable to fit different joints or locations to be iced. You can even fold it up when storing in the freezer.

I personally purchased mine from Amazon and received it quickly. I can’t believe I muddle through pathetic wimpy ice packs all these years until finding the Chattanooga ColPac ice pack!

I highly recommend you do yourself a huge favor and purchase this outstanding product too! By the way, the Amazon product link is just that & I am not affiliated with Amazon or Chattanooga ColPac in any way.

By runnergirl training at December 16, 2015 No comments: 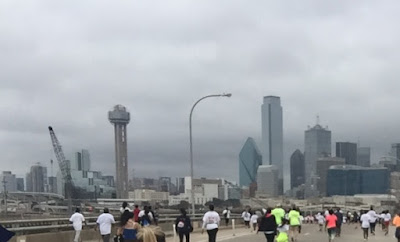 The Dallas Oncor Mayor’s 5k Race is a run that precedes the Dallas Marathon by one day and is part of the race weekend festivities. For runners who have run the Dallas YMCA Turkey Trot you will recognize the familiar course.  There are a few gradual inclines (read baby hills) in the downtown area as the race begins. After the race makes the turn around point runners catch a great view of the Dallas skyline.

The race was not overly crowded as the Dallas YMCA Turkey Trot has become in recent years. This race draws a significant population from elementary schools and therefor has children haphazardly bobbing in and out of the running throng. If you are a runner looking to PR keep in mind this race has more children than any other race I have participated in the Dallas area. I encourage kids to be active as much as the next person, however serious runners may see this race aspect as a potential drawback. If you are looking for a race to do with your kids though this is the ideal one for you!

All in all this is a decent race. I personally would probably pass due to the maneuverability through crowds of kids stopping, starting, moving chaotically is too distracting for me. But it is less crowded than the Dallas YMCA Turkey Trot so it gets a plus for that reason!

By runnergirl training at December 15, 2015 No comments: